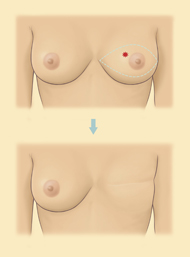 Breast Cancer Overview
There are many different types of breast cancer, which present at different stages and therefore treatment varies for each patient. Undergoing treatment can be an extremely daunting experience; Stephen McCulley and his team understand this and will ensure you receive the best care possible. However, there are many very good treatments for breast cancer and 80% of all woman with breast cancer are cured of their disease.

Breast cancer occurs when cancerous cells invade healthy cells – the most common form arises in the milk ducts. It may a pre-cancerous condition (known as Ductal Carcinoma in-situ or DCIS) if the cancer cells sit on the surface of the duct, but have not yet invaded the healthy cells. At this stage it is not an invasive cancer and cannot spread. However, it has a strong potential to become an invasive cancer (Invasive Ductal Carcinoma) in which the cancer cells grow into the breast duct.

The other relatively common type of breast cancer arises in the milk glands or lobules and is called Lobular Carcinoma in Situ (LCIS) or Invasive Lobular cancer once the cells invade healthy ones.

Breast Cancer Treatment Overview
The best course of treatment for you depends on the type of cancer and what stage it has reached. Stephen McCulley will discuss the best options for you thoroughly during your consultation.

Surgery and radiotherapy are the main form of treatment to remove any form of cancer, or areas that are pre-cancerous in the affected breast and lymph glands in the arm pit. The different types of surgery include a lumpectomy (also known as breast conserving surgery where the majority of the breast remains), a mastectomy (where one or both breasts are removed) and axillary surgery (in which the lymph glands are either sampled or removed).

Radiotherapy, along with chemotherapy or hormone therapy, may be used following surgery to treat potential cancer cells in the breast, armpit or around the rest of the body. These additional (or adjuvant) treatments usually start 6 weeks following surgery. Sometimes the chemotherapy will be given before surgery (called Neo-adjuvant chemotherapy)

Further information about breast cancer surgery can be found below. Please do not hesitate to contact us if you have any questions.

Breast cancer has the ability to spread to the lymph glands in the armpit area (called the axilla). Whilst this does not necessarily mean that cancer has spread to the rest of the body, it is very important to assess and treat it as soon as possible. Surgery to the lymph glands is common in breast cancer surgery and is often a routine part of the treatment.

When first assessing for cancer in the armpit area an ultrasound is taken, and then a biopsy carried out if any of the glands appear abnormal on the scan.

Axillary Node Sample
If the scans or biopsy is clear then the axillary node sample is performed at the same time as the cancer excision. A 3cm incision is made in the armpit and 1-4 lymph glads are removed, which are then sent for analysis. There are few side effects from having an axillary node sample, and there will be no need for a drain following the procedure.

Sentinel Node Biopsy
This makes up part of the routine lymph node sample to check for any evidence of cancer in the armpit glands. This recognises that if cancer does spread to the glands it will always go to the first lymph gland in the armpit area first, which is called the sentinel node. To identify the sentinel node a blue dye or radiolabel compound, or both will be injected into the breast. The radiolabel compound would need to be injected in the morning before the procedure, but the dye would be inserted at the time.

Axillary Node Clearance
If cancer in the armpit is detected then an axillary node clearance is performed to remove all of the lymph glands if cancer cells have been detected. A 6-8cm incision is made in the armpit and a drain will need to be left in for approximately 1 week. Following the procedure there is the potential risk of altered sensation in the inner arm, some stiffness in the shoulder as well as longer term swelling in the arm (lymphodema).

The type of cancer, size and evidence of cancer cells elsewhere in the breast will help to determine whether a mastectomy is needed. A mastectomy involves removal of the whole breast, it can be carried out as an operation by itself or in conjunction with a breast reconstruction. Radiotherapy will be required following surgery in selected cases. During a mastectomy usually four lymph glands are removed from the armpit to check for cancerous cells. See axillary surgery for further information.

Simple Mastectomy
This is when a mastectomy is carried out without a breast reconstruction. A straight scar will run across the chest; Stephen McCulley will try to make it as neat and flat as possible. Following surgery the patient can choose to wear a breast prosthesis inside the bra to give the appearance of symmetry while dressed.

Following surgery the patient will be required to stay in hospital between 1-2 nights. A drain would have been fitted, which will stay in place for 5-7 days following discharge. There are small risks of bleeding, infection, irregularity, wound healing problems and seroma (fluid) collection.

Skin-sparing Mastectomy
This type of surgery involves an immediate breast reconstruction in which some, or even all of the breast skin might be kept. For most patients the skin does not have to be removed to treat the cancer. Sometimes the nipple is removed, but this will depend on the course of treatment and the best option for you can be discussed with Stephen McCulley. Either an implant can be inserted or a 'flap' created using the patient's own skin, fat or muscle.

It is important to be aware that there is a risk of skin loss when a skin-sparing mastectomy is planned, as the breast has been removed the blood supply to the skin can no longer come through it. Skin loss is more likely to occur in patients who smoke. It might therefore mean that another form of treatment is more suitable and this can be discussed further with Stephen McCulley.

Subcutaneous Mastectomy
During this procedure the nipple is usually kept on the breast. This type of surgery is usually used for patients having a prophylactic mastectomy, which is the removal of a normal breast to reduce the risk of getting breast cancer because there is a very strong family tendency for the disease.

This type of surgery involves removing the cancer or pre-cancerous area with a rim of the normal breast tissue (known as a wide local excision). This leaves most of the breast and usually the nipple intact. The majority of patients that have a wide excision are also advised to have radiotherapy treatment on the remaining breast tissue.

For many patients this is a very good option as it avoids having a mastectomy (in which the whole breast is removed), and is a smaller operation. However, its suitability depends on the patient's type, extent and position of cancer.

A standard wide local excision is usually performed as a day-case operation under general anaesthetic. The position of the scar will depend upon where the lump is present. If you do not have a lump that can be felt and the disease can only be seen on an X-ray, then a wire will need to be placed into the breast on the morning of surgery. This will allow identification of the correct area to be removed. Where feasible the scar will be hidden around the nipple or in the breast crease. However, this is not always possible and therefore the scar is more commonly visible on the breast.

It is common for patients to have a small 'depression' on the area that has been treated, which can be made more obvious by radiotherapy. There is also the risk of the treated breast having a notable deformity or difference in volume if more than 10% of the breast tissue needs to be removed. In this instance Stephen McCulley might recommend a different type of surgery to avoid this problem, such as oncoplastic surgery techniques.

Oncoplastic Surgery
Stephen McCulley is a leading UK surgeon in oncoplastic techniques, including re-shaping the breast, breast reduction and adding tissue from the back or flank area to fill the part of the breast that has been removed. For further information click here.